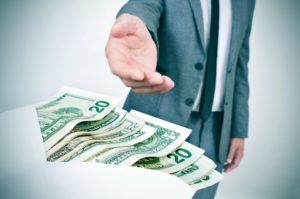 But what happens when workers fight back and pursue their employers for unpaid wages? While some workers recover the money they are owed, as many as 41 percent of workers never see the money recovered. Why does this happen? Small businesses sometimes restructure their companies or change names to avoid paying back wages. Because there are too few state regulators to go around, these employers may get away with not paying their workers properly.

So, what can you do if you believe you have been the victim of an employer’s wage violations? First, you might want to consider speaking to an employment lawyer in Houston, Texas like Moore & Associates. If the state doesn’t have the resources to investigate your case, our firm can look into your situation and fight to help you receive the wages you may be entitled to receive under the law. In some cases, you may be entitled to receive unpaid overtime or money associated with minimum wage violations.

Wage violations cause serious societal problems and harm entire communities, not just the individual worker suffering injustice. Workers who are not paid their fair wages may struggle to make ends meet. They may face eviction from their homes because they are unable to pay their rent. Their children may face food insecurity. Wage violations add to disparities in wealth distribution between the richest and the poorest people.

Workers who want to make a complaint against their employer in states where there are no state Departments of Labor may have to appeal to the U.S. Department of Labor, which doesn’t have the time nor the resources to take on all cases. In states where there aren’t enough investigators, workers may not know where to turn. At the end of the day, workers who want to get paid for their back pay, unpaid overtime, or wage violations, may have to turn to an employment lawyer for help.

Moore & Associates are qualified wage violation lawyers in Houston, Texas who believe that every worker should receive fair compensation for their work. If you believe your employer hasn’t paid you the amount of money you deserve, visit us at https://www.mooreandassociates.net/ to learn more about your options and rights.