HOUSTON, Texas. According to Click2Houston, more workers in Houston are asking “What is sexual harassment?” and “What can I do about it?” The #metoo movement has made more people aware of the prevalence of sexual harassment in the workplace. Yet, some individuals may worry about the potential repercussions of reporting harassment. Others may not know whether they have experienced harassment. Is a co-worker asking you out on a date harassment? Is a crude remark harassment? 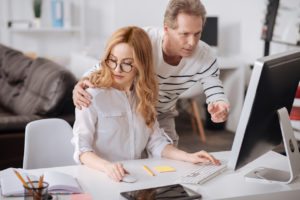 According to Cosmopolitan, we’re more connected to our co-workers than ever before. We may be Facebook friends with a boss. We may send out tweets that can be read by our employees. At what point, does a text, tweet, or personal message cross the line? According to Cosmopolitan, approximately 1 in 3 women have been harassed at work. Women in the restaurant industry, those in retail, and those in tech reported the greatest impact of sexual harassment in the workplace.

And harassers may not always be male. 10 percent of women reported being harassed by female co-workers or managers. Other women report having to listen to sexually explicit conversations while on the job. As workplaces become more casual, it can be more difficult for the boundaries to be clear. Talking about your conquests on Monday is not okay. The office isn’t a bar or coffee shop.

In other industries, the boundaries can be even more blurred. Professors may hang out with their students at bars. In the media industry and in the entertainment industry, workers may talk shop at bars or restaurants. At what point do casual meetups become something more? At what point does a boundary get crossed?

At the end of the day, everyone needs to determine their own limits. If you believe someone has crossed the line, either inside or outside of work, it is important to speak up and to document the encounter. Of course, for some women, this can be difficult. If it is your boss who is pushing the limits, it can be intimidating to speak up. This is where having witnesses can help. Or, if you are very concerned, consider seeking legal counsel.

Send a clear email asking for the behavior to stop. Follow up with human resources. If you feel that your complaints and concerns are being ignored, consider speaking to a qualified employment lawyer in Houston, Texas, like Moore & Associates. Our firm can review your situation and help you seek justice for your claim under the law. Visit us at https://www.mooreandassociates.net/ to learn more.