HOUSTON, Texas. According to the New York Times, NBC fired Matt Lauer just hours after a woman reported that Lauer had made inappropriate sexual advances. NBC claimed that this was the first complaint it had received against the popular host of the Today show, but that the company had reason to believe that this was not an isolated incident. In fact, the Atlantic reports that NBC had been aware for months that reporters were working on stories regarding sexual harassment accusations against Lauer. In the days and weeks to come, we’ll likely learn more about the nature of the allegations against Lauer. Right now, Lauer’s firing has shocked many in America who have been watching him for two decades. 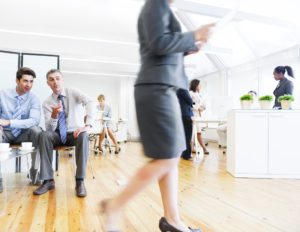 Yet, Lauer’s firing is symbolic of a larger cultural shift. For years, women and feminists have been writing about the man who is too big, too well-known, too high on the totem pole to be fired. He has too many connections. The business relies on him. The recent firing of men in such high positions sends a strong message to the community. Whether you are Charlie Rose, Matt Lauer, or a big Hollywood producer, you are not too big to get fired.

So, while the culture begins to change, many women working in fields where the men aren’t famous, but still remain powerful, may wonder—what can I do? When your boss is not a celebrity, you can’t always threaten going to the media to get your company to take action. Yet, more companies, men, and human resource departments are aware of the seismic shift that is taking place in the workplace. More women are speaking out. And more women are being heard.

What can you do if you are victim of sexual harassment in the workplace? You may want to consider speaking to a qualified Houston, Texas sexual harassment lawyer, like Moore & Associates. Our firm will take the time to listen to your story, help you gather together evidence, and assist you through every step of the process. Women have faced reprisals for reporting sexual harassment, so it is important to protect yourself.

Though many men have faced the public spotlight for their private actions on the workplace, America’s workplaces still have a long way to go. While more public-facing companies are taking steps to change company culture, smaller companies may lag behind. Not all workplaces are as swift to fire a boss or manager after even one of two women come forward reporting sexual harassment. While recent events are likely to result in a larger cultural shift, it could take some time before some workplace cultures change. If you are concerned that speaking up could lead to lost opportunities, a lost job, or lost wages, you are not alone. Protect your rights and career by speaking to a qualified sexual harassment lawyer. Or, visit our website at https://www.mooreandassociates.net/ to learn more.